Victor Carl Eliason was born on May 14, 1936, in Fort Dodge, Iowa, the son of Oscar and Norma Eliason. Oscar Eliason is perhaps best known for the gospel song, “Got Any Rivers?”

In 1954, after growing up in Cook, Minnesota, Vic was planning on attending technical college in Minnesota when God called him to the ministry.

Vic graduated from Open Bible College, in Des Moines, Iowa, and was ordained in October 1957.

In 1959 Vic and his wife, Freda moved to Milwaukee to become Bible club director of the Milwaukee, Wisconsin chapter of Youth for Christ. Each week he would lead twenty Bible clubs throughout southeast Wisconsin. As Vic recounted, “The salary was $50 a week, no health insurance, no guarantees.” Later he was promoted to interim director of Milwaukee Youth For Christ, becoming full director shortly after.

In May 1961 the first radio broadcast went on the air with Sacred Stylings, a 30-minute radio program on WBON-FM in Milwaukee. As listeners responded, the programming increased to a full broadcast day. In 1970 the ministry, then renamed the Wisconsin Voice of Christian Youth, purchased WBON for $315,000 and renamed it WVCY-FM. That radio station became the flagship of the network now known as VCY America, heard on over twenty owned-and-operated stations, and dozens of affiliates.

In 1980, Vic filed with the Federal Communications Commission an application for VCY to begin broadcasting on television. This led to the launch of Milwaukee’s first Christian television station, WVCY-TV 30, in January 1983. Vic also hosted the nightly live talk show In Focus that aired on WVCY-TV.

As a leader in Christian broadcasting, Vic was elected to the board of the National Religious Broadcasters (NRB) where he served for 18 years, and served also as the president of the Midwest NRB chapter.

Over the years other broadcasters have come to Milwaukee to learn from Vic and have been able to spread the gospel thru  Christian broadcasting across America and around the world. One such station, Operation Nehemiah, is on the air in South Sudan thru the support of Crosstalk listeners. 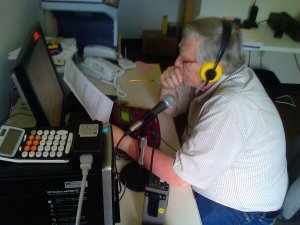 In May 2001, Vic was awarded an honorary doctorate at the 74th Annual Commencement exercises of Bob Jones University.

In 2008, Vic was included in the panel at the Value Voters Presidential Debate in Fort Lauderdale, Florida.

On May 15, 2011, Governor Scott Walker proclaimed that Sunday as WVCY Day in honor of the 50th anniversary of the VCY Radio ministries.

so hosted monthly Rallies at the Waukesha Expo Center, featuring guest speakers, new Christian films, or musicians. The Expo was regularly packed as hundreds and often over a thousand people would come to these events.

Vic ministered in many churches over the years through “Singspirations,” an evening gathering featuring favorite hymns and gospel songs as well as many of the stories behind the music. Homespun Harmonies, airing at noon on VCY radio, features Vic introducing some of the classic gospel songs. Overnight listeners to VCY enjoy Music ‘Til Dawn, a collection of quieter hymns and inspirational poems narrated by Vic. Viewers of Inspiration Time with Hilton Griswold would often notice Vic accompanying on the organ.

On December 5th, 2015, Vic entered into the presence of His Savior, where he heard the words, “Well done, thou good and faithful servant.”